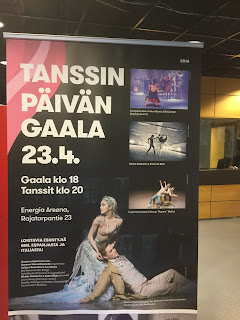 Dance was celebrated on Saturday, April 23th, at Energia Areena in Vantaa. Two-hour gala was full of joy of dancing and performing. There were dancers from 8 years old to adults, representing many styles and genres. The audience enjoyed and occasionally run a bit wild :) The gala was organized by the Cultural Services of Vantaa.

Arena was not totally full so the host Marco Bjurström invited people to change seats and sit closer to the stage. I did that but I'm not sure if I found a great seat. It was on the right side and I couldn't see the right side and back part of the stage. So I missed some parts of show, but not much. Also my camera had some problems with stage lights; especially those dancers dressed in white were practically just white spots. That's why I don't have pictures of all numbers, and those pictures I have are of low quality. Hopefully my words compensate! 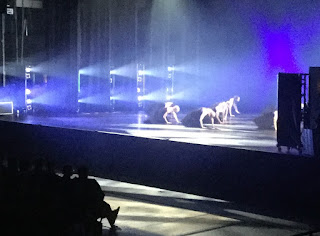 First number was Sateen kuiskaus by group EXTRA REPERTUAARI from Vantaan Tanssiopisto. It was extremely beautiful, flowing dance. I just loved the music, Max Richter's November. I was thinking already during this first performance that this will be a wonderful evening. I was happy from the very beginning.

Finnish National Ballet was strongly represented in various numbers. First one on stage was young Atte Kilpinen, whose Sielulintu was just amazing. Dancing looked so easy even though the gestures are difficult. And I can only guess how strong body control it takes to be able to move like that. 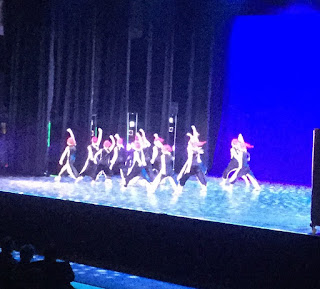 Beauty was followed by fun. Those kids from Helsingin tanssiopisto, aged between 8 and 10, brought laughter and energy on stage. Pingviiniparty was absolutely hilarious! For some reason I am always a bit nervous when there are children performing, even though there is no need for that. Every time - including today - they do very well. These young dancers smiled wide all the time and made the audience to smile. It's wonderful to think about the joy of movement and learning, showed by these determined little penguins. 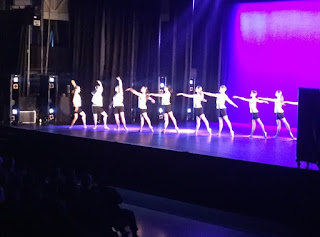 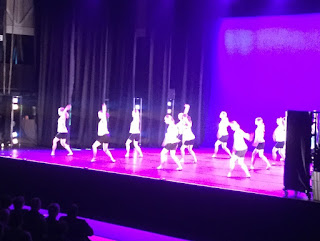 Another number by Helsingin tanssiopisto was Toccata, performed by young dancers aged 14 to 18. Like the younger ones, they too are in special training class. And now the atmosphere changed totally. After chill and funny penguins, David Garrett's variation of Bach's Toccata felt like a hitting tornado! What a rock-opera! With Anandah Kononen's choreography it brought dynamic energy on stage. I just love the song so I was and still am extremely happy about the marvellous show created with it. 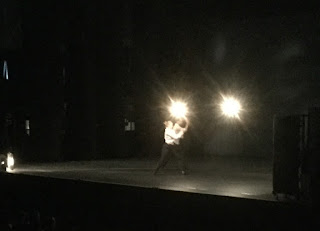 Tornado was followed by calm, which actually was calm before storm. Valtteri Raekallio's Mihin valo katoaa? was the longest number. And yet, in only 12 minutes, him and Auri Ahola (from Finnish National Ballet) presented a beautiful but rugged story. There was light at the beginning, but as time went by the light faded and turned into darkness. Love catched fire but it flamed out, hate started to grow. There was a huge contrast on stage when simple lighting and costumes supported highly intensive storytelling. Music was Ben Harper's God Fearing Man.

After this was again time for young energy. StepUp Schools children, aged 9 to 10, were charmed by apple. Omenan lumossa was made around Fred Waring & His Pennsylvanians's Heigh Ho, choreographer is Netta Rekomaa. Joy of recognition: hey, this is the song what the seven dwarfs sing in Snow White movies :) And again the kids were full of energy and joy, joy of doing, of dancing, of performing.

I couldn't get a good picture from Tanssiteatteri Raatikko's number Duetto Enkelten tanssista. There were two angels, one black and one white. In my camera the white angel was totally lost in lights. This number was part of Enkelten tanssi, a piece which has been part of Raatikko's repertoire for over 20 years. Not a surprise, so impressive was this duet. Choreographer Marja Korhola danced with Heidi Suur-Hamari. Music was Bach's Fantasia ja fuuga, g-molli, BWV 542. 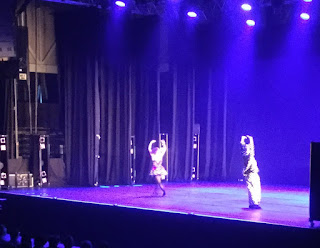 We saw also another duet, Duetto Alkulaulusta, performed by Mia-Mari Sinkkonen and Kalle Lähde. It was reckless combination of acrobatics and jazz dance. Reija Wäre's chorepgraphy was both funny and awesome. Costumes reminded circus but the show was definitely not a circus or a joke, it was of great expertise. 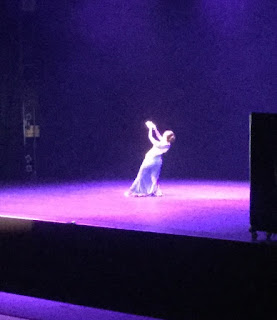 One of the most impressive numbers was Laura Zaray's Baladi Ruh. Oriental dance is not an easy way to dance. I was stunned by how a human body moves! Sometimes it was just a little part of body moving while all the rest stayed immobile. And even though the dancer stayed almost at one spot on stage, yet her dancing filled the whole stage, the whole arena. Her presence was extremely strong.

Atmosphere was intensive also in Bajadeeri, performed by Salla Eerola and Michal Krčmář. They performed Pas de deux from first act. Chorographer is Natalia Makarova, music by Ludvig Minkus: Allegro non troppo and part of Allegro Apassionato. Classical ballet just is so so beautiful. And fascinating, the combination of lightness, sensibility and strength.

Then it was time for reggaeton, presented by SalsaStudio. Choreographer Guillermo Zayas and fellow dancers brought cheerful energy on stage. As the host "warned", there was some movement in the audience, too. Music for Tengo (Reggaeton) Remix was Yomil, el Dany, JBalvin and Don Omar.

For a moment it was time to calm down and listen to international Dance Day declaration, read by mayor Kari Nenonen. It was written by samoan dancer-choreographer-director-scenographer Lemi Ponifasio. Official Dance Day is today, 29th April, but it was nice to have the declaration read in the gala.

After the declaration was time for action! It was a bit of surprise to see an orchestra on stage, nine men with their instruments :) Compañia Kaari Martin performed fragments of KILL Carmen: Härkätaistelu. Choreography was made by dancers Mariana Collado and Carlos Chamorro with Kaari Martin. Ten minutes of bullfighting between man and woman made the audience to sweat. 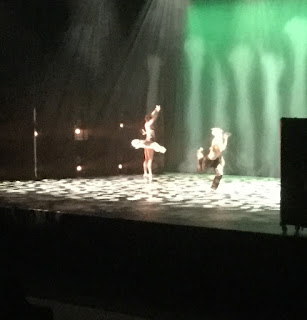 Next number was - again - one of my favourites. Kevättä rinnassa by Anandah Kononen, performed by Mai Komori and Antti Keinänen from Finnish National Ballet. And oh yes, more David Garrett! :) This time he played Vivaldi, Winter from Four Seasons if I'm correct. And another oh yes, ballet on stage, this time combination of classical and neoclassical ballet. It felt like we all had such fun, the dancers and viewers.

And there was still another piece of ballet, Pieni merenneito. Tiina Myllymäki was mermaid and Michal Krčmář prince, and they danced a stunning fragment, Pas de deux from first act. Their dancing was just incredible, and so were also the music by Tuomas Kantelinen and choreography by Kenneth Greve. (Greve, just a sidenote, I almost run over when arriving at the arena. He was going out and I was getting in.) I had seen The Little Mermaid the day before via Opera's website, but of course it's different when you see it live. Camera can never share the feeling on stage, between dancers, between dancers and audience. I love in ballet, and dance altogether, how much can be told even with tiny gestures.

From ballet to salsa! It was SalsaStudio back on stage, this time with Bailando Salsa Versiona. Again choreography was made by Guillermo Zayas. Music was Isaac Delgado, Gente de Zona & Descember Bueno. While watching I was thinking how strong the physics of dancers must be. Over four and half minutes of such a eventful dancing. And once again I just wondered and amazed how the dancers can remember all steps. Well, others can and do, others sit and watch :) 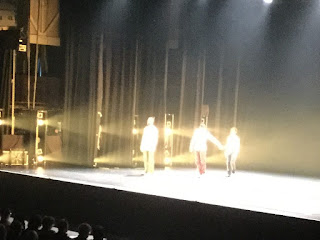 Then there were guests from Italy, E.sperimenti Dance Company. They had two numbers, Va pensiero and Papageno & Papagena. Choreographies were made by Federica Calimberti, Mattia De Virgiliis and Francesco Di Lucia, music was Mozart ans Verdi. Va pensiero was a show of three men, in which the playfullness of choreography and expressiveness of dancers really amused the audience. So did also Papageno & Papagena which caused the audience to laugh, a lot. It was so funny and stunning to see how the movement combined with singing, female and male both in turn and together. I was thinking of theater, some clasical comedy. Such exaggerative gestures! 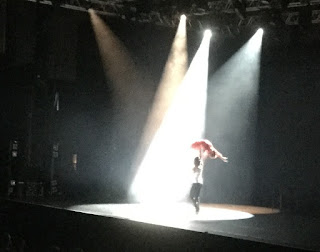 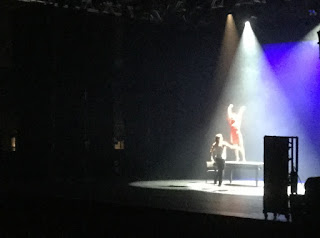 After the gala I left and went home really impressed. I also felt feverish, it felt that my bones were radiating cold but my skin was hot. But I couldn't stop smiling. Such amazing setting of finnish and international skill, evening full of happiness and energy, full of peace and sensitivity, full of joy of dancing and power of music.